Skipped a few weeks. Sorry to the throng that is my readership (Thanks Mom!) This week and the successive summer weeks will probably be rants and raves, and not lessons. This blog is supposed to be full of stuff for effective teaching, so I hope these upcoming post will serve as a chance for reflection and recharging . 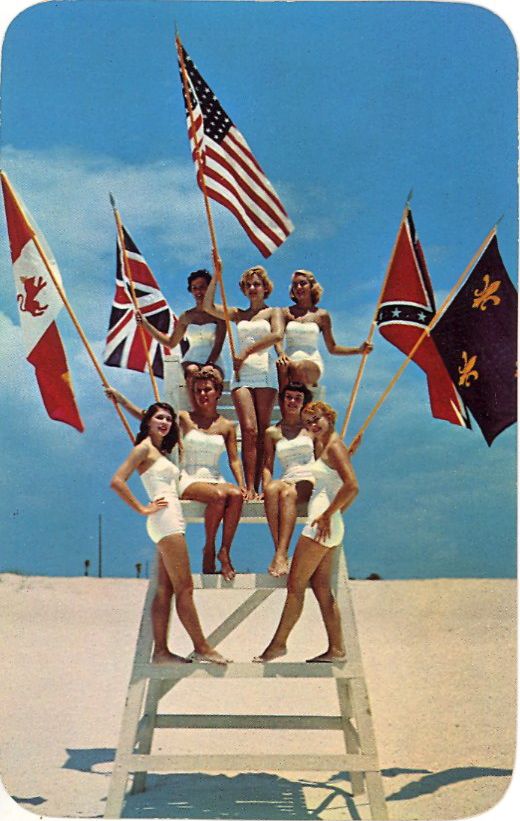 Pensacola, Florida is known as the “city of five flags.” It was not until 2015 tht the city saw fit to remove the Confederate Flag from its government buildings and the gateway to the city, and replace it with the state flag.

I traveled home to North West Florida to see my mother and sisters for the first week of summer vacation. I grew up  there and have many strong feelings about the place. It is in the south. It is in the Bible Belt. It is in a red state. It is a military town. It is one of the poorest counties in America. And everything… is just fine…

Proud idiots pose in front of Pensacola’s Grafitti Bridge a few years ago. For a great response to this kind of attitude read this blog post.

In its own weird way, it also has the tiny patches of progressivism and liberalism. People protest wrongs. There is a billboard on a highway that accuses the NRA of terrorism.  Queer folks have been using our beaches, and downtown as a home and recreation for decades.We had an awesome punk rock scene in the eighties and still have a thriving music culture.

My mentors live and retire there. Linda who taught me everything I know about teaching goes to Marco Rubio ‘s office once a week and says to his staff :

“Mark has received 750,000,000 (ok I don’t remember the number but this is close)* from the IN ARE AYE. Now what is he gonna’ do about gun control?”  (Linda has a fantastically beautiful accent.)

So it is very much the south. A place of contradictions and conundrums. A place where smiling old ladies will fix you glasses of sweet tea and ask you matter of factly if you have let the Lord Jesus into your heart? (If you want more tea, or to ever date their granddaughter again, there is only one answer.)

A place where there is a literal train track where economics and color change. Where segregation is alive and well on the beaches, in the  parks and restaurants. A place where if you are poor you have been so for maybe one hundred years now. A Place that keeps you on your side. A place that can be physically so beautiful but so superficially polite, that when you are rejected and vilified for your difference, you feel somehow to blame.

And so I teach. I taught there for six years in a desegregation magnet. We used a gifted curriculum and applied its best practices to all children. Color, ethnicity, academics, all differences received the same high level of careful instruction. All were given opportunity to learn and care. But eventually, I had to leave.

So I am stuck with the conundrum that is the South, and these days America. Do we stay and slog out the good fight in places that turn their backs on us because our differences are more palatable than our similarities, or do I go and find a place where I am comfortable ?

A week ago I got the news that I will be moving on to a new job. A place that just might need allies, and fighters. A place where change has already started but ultimately the success of the students will be in response to if people will see the similarities and not the differences.

So I don’t know if I made all the right choices leaving one place for another. Fortunately there is always a place for people looking to do good, to open doors, and hearts.

*I was way off.  Linda let me know it was only 3 million.

Each year students across the United States learn about their states, and the governments that are responsible for managing the laws and safety of their people. Our governing bodies which in almost all states are  bicameral, except one. ( Whats up Nebraska?)  Most of us study government around the first of the year. Many legislatures convene then and are in session just after. This year because of scheduling, we didn’t tackle state government until the end of this year. So, this week I want to share a lesson that I originally snagged from the Washington State Legislature on the process of creating a Bill.  It is called  The Perfect Pizza, and is a wonderful way for students to experience major concepts of government. I pick up the lesson after having gone through the system of checks and balances and discussed creation of Bills and passage into law(School House Rock remains the  BEST way to teach this to students.)

This is how I would teach it:

Today we are going to explore the process for creating a Bill in our state.

Turn and talk to a partner about how you think a Bill becomes a law.

Ok great. Now grab a sticky note and write down one thing involved with Bills becoming a law.

While they do that I write the following on the board:

Okay. Now place your stickies under the word you feel like it most relates to.

Based on what you have taught this far responses could be:

I then will help students remember the steps by posting them. Fortunately most state legislatures actually post these steps, or even provide graphics.

This is pretty representative of most state’s law making process.

After the review I place the students in small groups. At first they are going to simulate working on writing a law. They have been submitted a basic idea (by many different citizen groups) for a state pizza.   They will work in the group to create a single bill and will have criteria to do so.

Each group gets a summary card with a run down on all the requests from citizens for a state pizza.

a sample card could say:

Students are then given one of these handouts.

They are then tasked with, as a group, creating a law that best represents the wishes of the citizens.

In this process your students will argue and debate. I circulate and let them go for a while. Most groups have some trouble getting started and I ask:

Q: When we are in groups, what helps us stay organized and have good conversations?

A: We usually decide group roles including a facilitator.

I let them arrange roles. I suggest they get a recorder, and a reader and they fall into their roles.  The handout provides a template bill that describes the pizza and mimics the language of a Bill.

The kids engage in the civic practices of:

Take look at this student example

Students also have to come up with a statement with three supporting reasons to share with a mock legislature meeting.

I have kids create posters to represent their proposed bill. I then let them present to the whole class. From here you can do many things:

But I would keep it simple: let the kids do a silent vote on the best pizza. It keeps from the real nastiness of politics being played out in the classroom. Not that you don’t want to teach them that as well, but that’s for another lesson!

This process is not so much mimicking the  exact progress of Bill to law. I am really looking for students just to appreciate the difficult task of being both a citizen and an elected official. It provides a lot of opportunity for discussion and reflection on the overall process. I didn’t even get into the veto process, which in our state, includes line items. But you can adapt it to a host of teaching points.